Get a Quote
You are here: Home » News » What if the internal fixation of an inter rotator fracture fails?

What if the internal fixation of an inter rotator fracture fails?

Hip fractures are estimated to affect 500,000 adults in the United States each year. They have a tremendous impact on quality of life, currently accounting for 3-7% of in-hospital mortality and a one-year mortality rate of 19.4-58%. Approximately half of all hip fractures are intertrochanteric (IT) fractures. The two most common implants used to treat IT fractures are the cephalomedullary nail (CMN) and the sliding hip screw (SHS).

Despite advances in technology, bone discontinuity and fixation failures such as penetration of the femoral head still occur and can be devastating. Recent studies have reported resection rates of up to 6% with modern implants. Risk factors for fixation failure include tip-tip distance (TAD) >25 mm, inadequate fracture repositioning, unstable fracture patterns, cephalic spikes located to the side or below the center of the femoral head, and internal rotation of the cervical stem angle. Aging and osteoporosis are also associated with fixation failure.

This was a retrospective survey of patients treated at two institutions located within a healthcare system in a large metropolitan area. The case logs of two surgeons (JS and BC) were queried for all patients who received cement-reinforced revision fixation after failure of initial fixation of IT fractures from January 2018 to September 2021, after approval by the institutional review board. The use of cement reinforcement during revision surgery was confirmed by electronic medical record (EMR) review of operative records and postoperative radiographs. We included all patients with signs of cemented strengthening in revision fixation after failed initial CMN or SHS fixation of IT fractures (Figure 1). We excluded patients with femoral neck or subtrochanteric fractures, patients who did not undergo revision fixation with cement reinforcement, and patients who underwent arthroplasty at the time of the initial revision surgery. 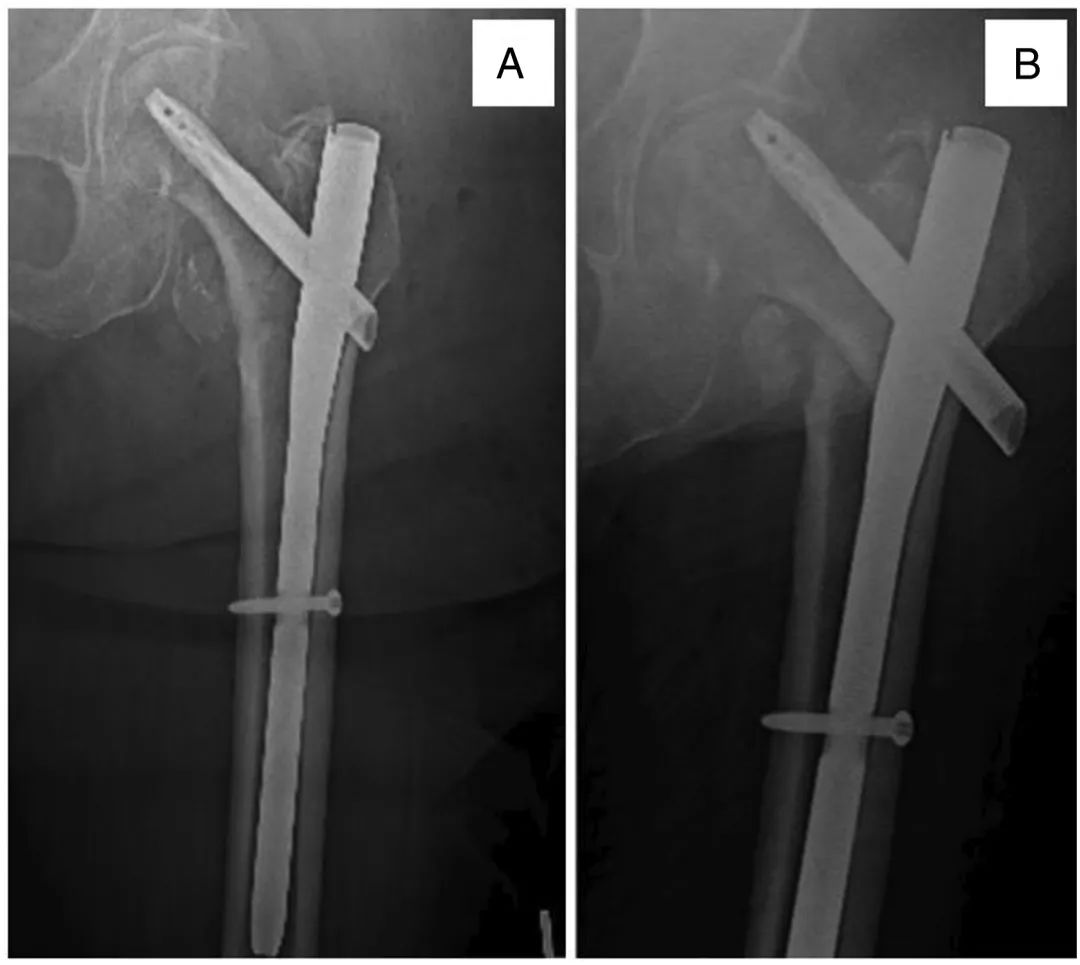 Figure 1. A 76-year-old woman underwent intramedullary nailing for an intertrochanteric fracture of the femur (A), with persistent hip pain 2 months later due to the implant incision (B). 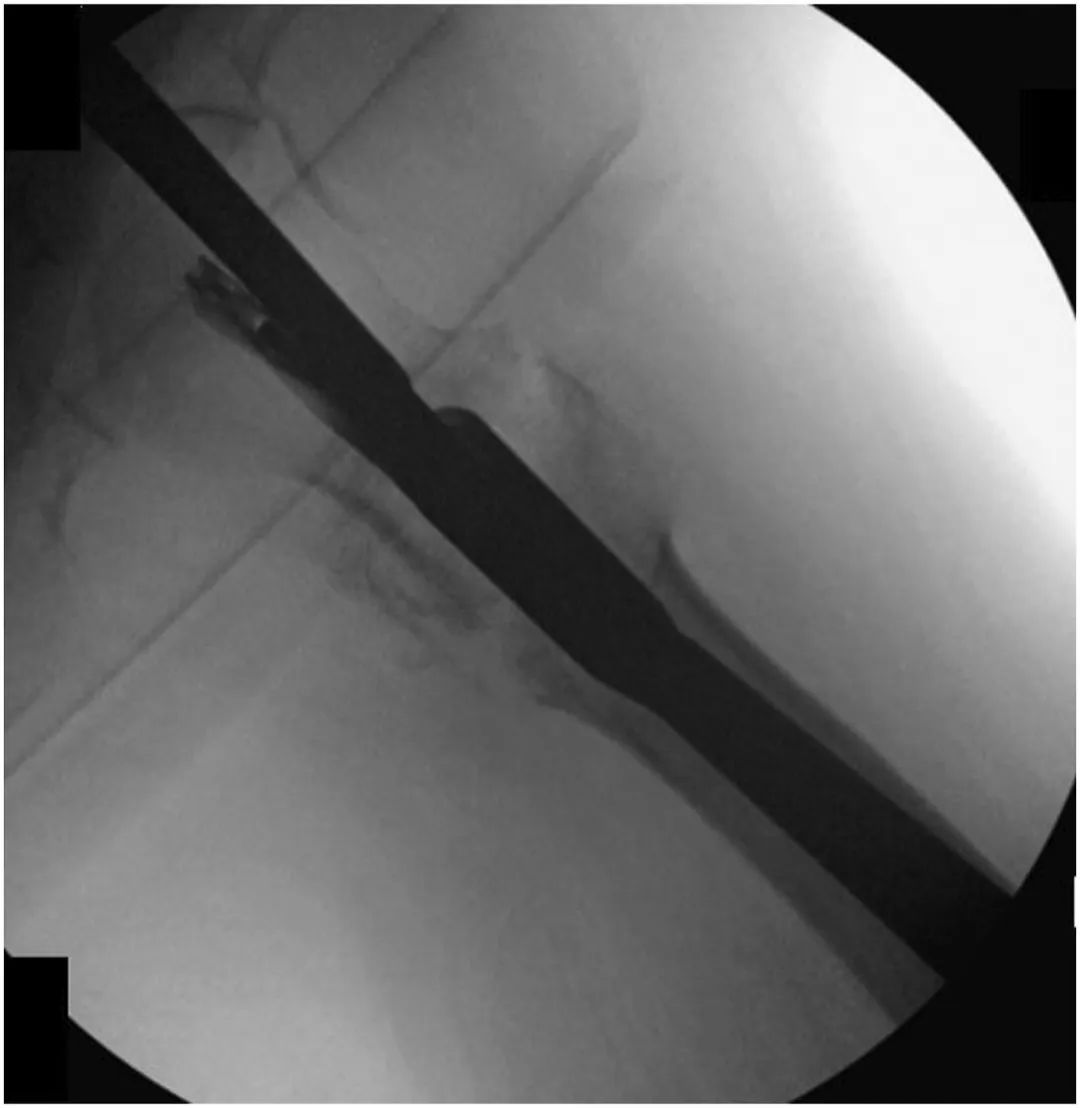 A 1-2 cm transverse incision is then made down through the iliotibial fascia (ITB) fascia. The original head nail is removed with a reverse threaded guide (Figure 3). In the case of femoral head perforation, a hollow guide with a distal locking screw is used in order to prevent leakage of cement into the joint (Figure 3A). Specifically, the matrix was first injected after removal of the outer two layers of the triple cannula and then put into the perforated area by reinserting the outer two layers. 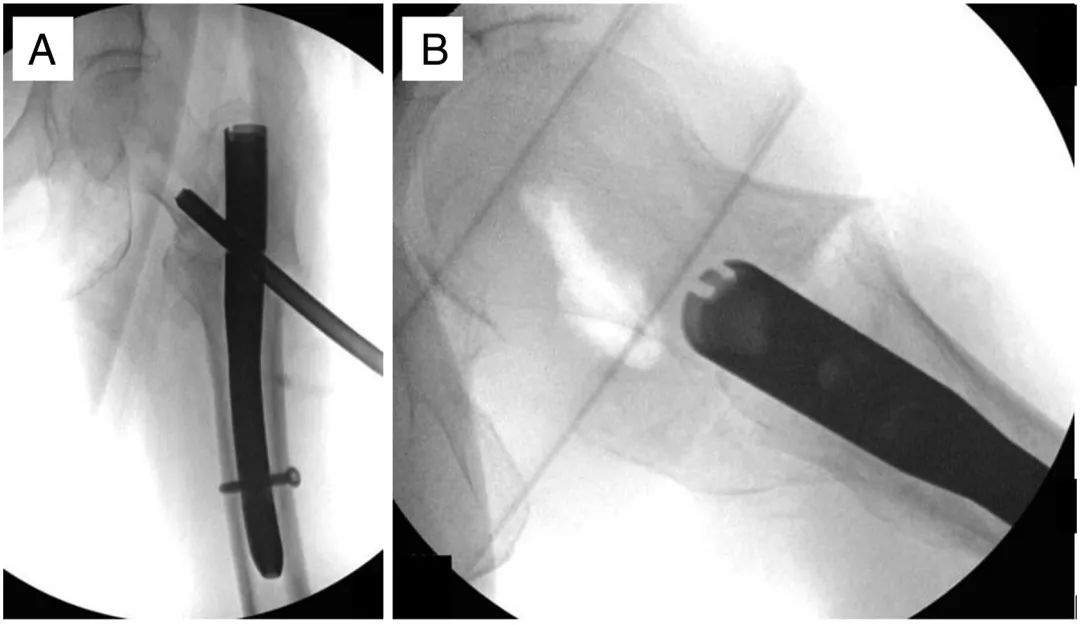 Figure 3, Intraoperative anteroposterior (A) and lateral (B) images of another patient showing femoral head with interstitial bone defect graft.

Next, the limb is tractioned and then the fracture is repositioned into more of an exostosis for revision fixation. In cases of malunion or fibrous healing, a percutaneous osteotomy is performed using a 1/4" bone gouge with an anterolateral approach. This is rarely necessary, but very effective when needed to produce an improved cervical stem angle (target >130°).

A new screw or spiral blade is then placed into the subchondral bone in the femoral head along the axis of the femoral neck, making sure to be careful not to penetrate the head (Figure 4). The screw is placed intentionally avoiding the previous nail tract, but still pointing to end at the center of the femoral head. (Figure 5) 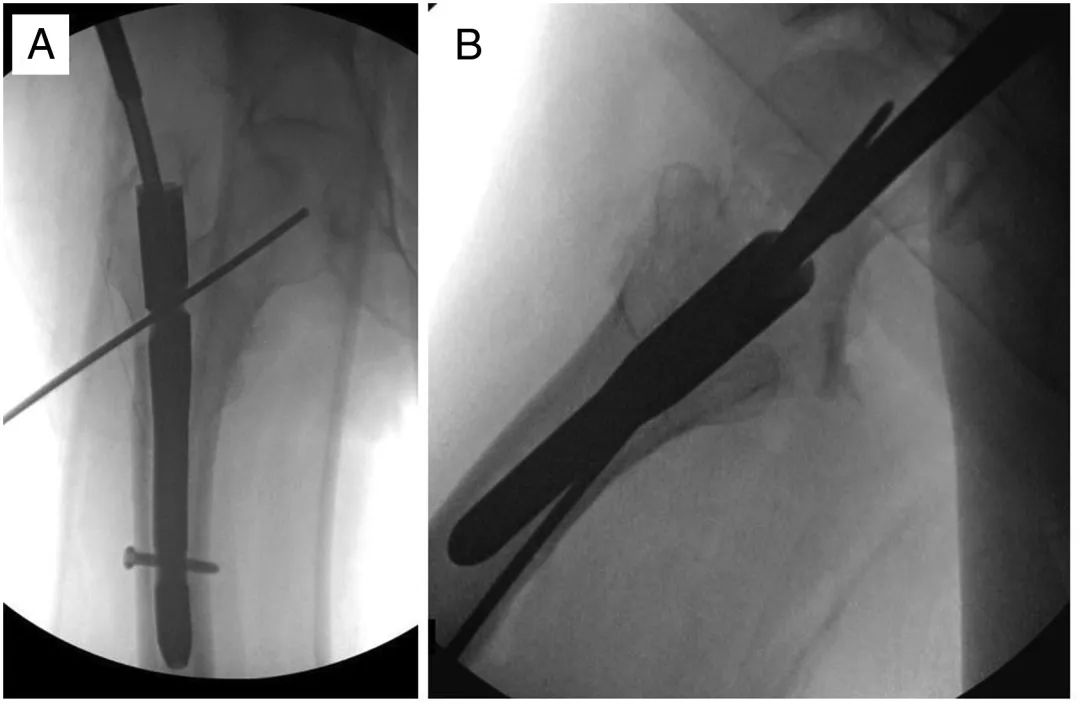 Figure 4, Anteroposterior (A) and lateral (B) images of another patient showing the insertion of the kerfing needle along the path of the new head nail. 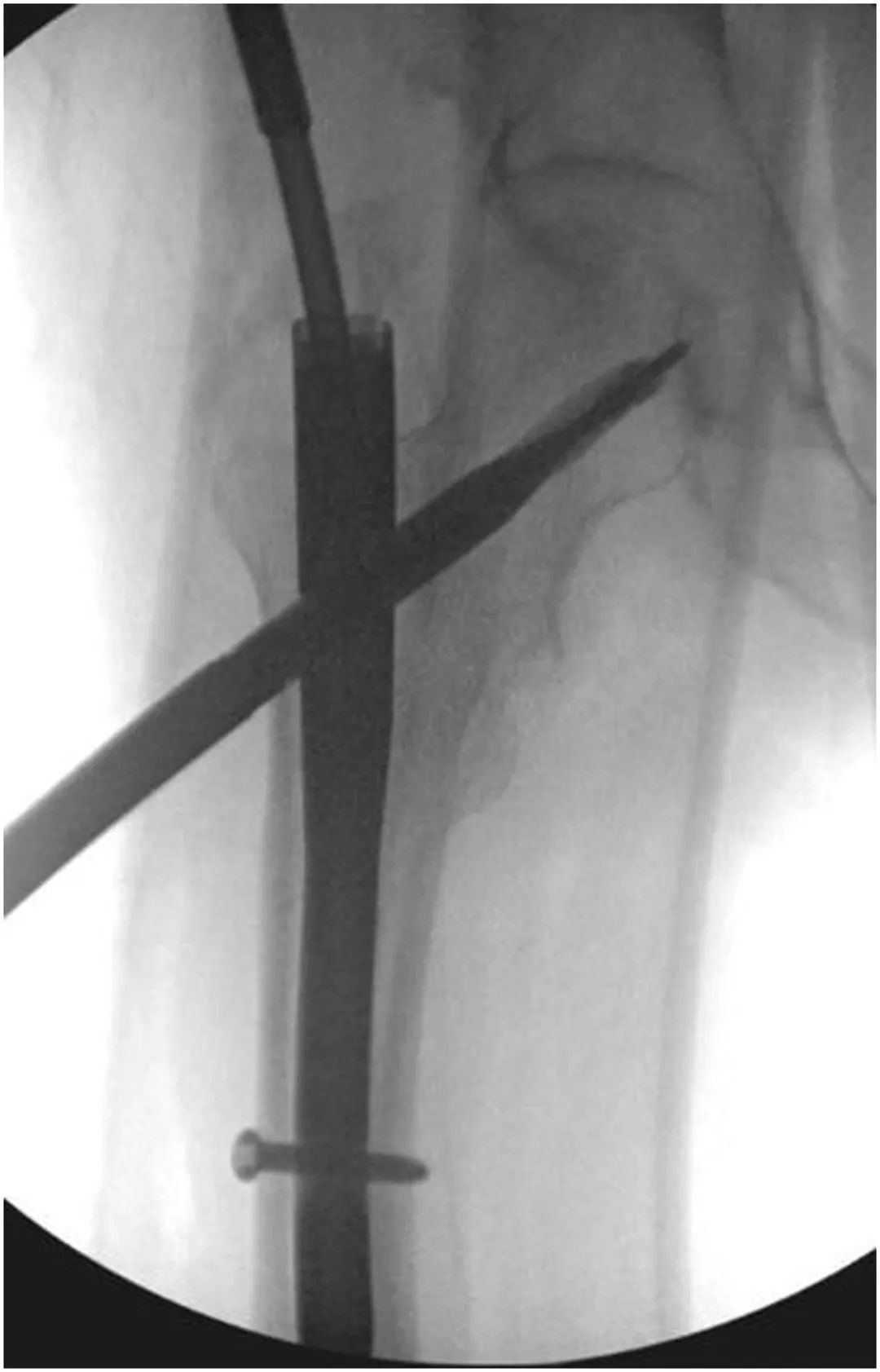 Figure 5, intraoperative fluoroscopy showing the insertion of a new cephalomedullary blade along the guide wire path, which was subsequently tightened by a set screw.

Finally, the femoral head is filled with bone cement using an injectable bone cement system (Figure 6). Care is taken to avoid extrusion into the joint by using real-time radiographs and adjusting the depth and orientation of the cement cannula. 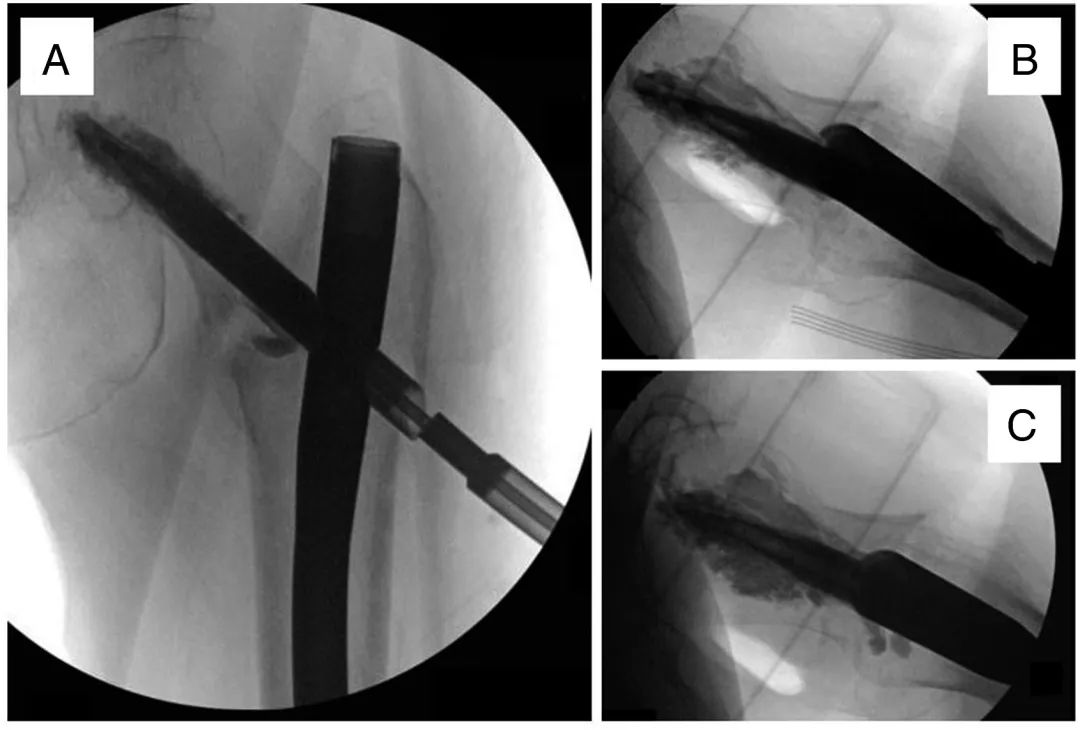 For patients receiving initial fixation of the SHS, we remove the SHS and place a long CMN. after making a 5-cm incision centrally below the greater trochanter and identifying the ITB, the incision is dissected down to the lateral plate. All plate screws are removed using a suitable hand screwdriver and the lateral plate is then removed. The tension screws are then removed with a reverse thread guide as previously described to reposition the fracture to a greater degree of valgus. A 5-cm incision is then made at the tip of the greater trochanter as previously described. A guide wire is inserted at the most proximal end of the greater trochanter and advanced into the femoral stem. An open reamer is introduced along the path of the guidewire. A long ball-tipped guidewire is then threaded into the center of the distal femur below the level of the patella. Next, progressive reaming was performed until tremor was felt in the backbone. All of our patients received a long CMN nail with the TFN-ADVANCED (TFNa) proximal femoral intramedullary nailing system (DePuy-Synthes, Raynham, MA).

Hip fracture mortality is high. Recent studies have described a 3-7% in-hospital mortality rate, with one-year mortality decreasing from 19.4% to 58%. In particular, IT fractures have been shown to account for 27% of mortality at one year. Our clinical series showed no in-hospital mortality and a one-year mortality rate of 13.6%, which is relatively low compared to the literature. Because early bed mobility after surgery is associated with lower mortality, good ambulation and functional outcomes in our series could explain the relatively low mortality observed in our patients.

Patients with failed fixation of primary intertrochanteric fractures followed by revision fixation and cement-reinforced treatment have demonstrated good long-term clinical and quality-of-life outcomes. The procedure was used only in cases where the majority of the acetabular articular surface was preserved and the head nail remained contained within the femoral neck. Considering the limitations of revision arthroplasty in frailer elderly patients, this procedure shows promise in safely and effectively reducing serious complications while reducing operative time and cost in this group of patients.