Get a Quote
You are here: Home » News » How to Use MRI to Diagnose Knee Meniscus and Ligament Injuries？

How to Use MRI to Diagnose Knee Meniscus and Ligament Injuries？

The meniscus is a meniscus-shaped fibrocartilage with a triangular cross-section located between the tibial condyle and the plateau, which significantly improves femoro-tibial joint consistency and plays an important role in knee joint dynamics.

On sagittal and frontal images, the normal meniscus is triangular in hypointense. On the most lateral sagittal image, the meniscus is a "bow-tie" structure consisting of a mid-sagittal section combined with the anterior and posterior horns (Figure 1). 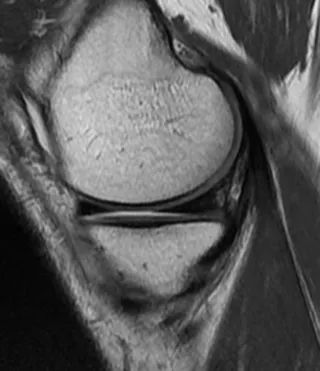 Figure 1 Normal MRI appearance of the medial meniscus. Proton density-weighted sagittal view: The anterior and posterior meniscal angles are homogeneous hypointense triangles. The meniscus is bow-shaped and consists of sections of the middle section that connect its anterior horns in front of it and its posterior horns behind it.

It is useful to understand certain anatomical abnormalities as they can simulate a meniscal split: 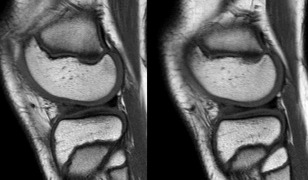 It is common practice to basically distinguish between traumatic meniscus and degenerative meniscus. Traumatic injuries result from the application of excessive mechanical force to a healthy meniscus. In young adults, the fissure is usually caused by indirect valgus injury, a sudden elevation of the tibia after external rotation or hyperflexion of the knee at 20° of flexion. Instead, degeneration occurs as a result of normal mechanical forces acting on the meniscus damaged by interstitial myxoid degeneration. Horizontal meniscal fissures may develop spontaneously or they may be caused by minor injuries.

According to the direction of the cleavage plane, fissures can be divided into horizontal fissures, vertical fissures or complex fissures

There is a split plane parallel to the tibial plateau that divides the meniscus into superior and inferior segments. These horizontal lesions are widespread, can significantly affect the medial or lateral meniscus, and are considered stable, although debris that migrates into the groove after damage to the medial meniscus has been described.

Perpendicular to the tibial plane and along the circumference of the meniscus. These more commonly affect the medial meniscus. A complete injury is considered unstable and divides the meniscus into medial and lateral segments. The scanning level also includes the lateral meniscus body and the posterior horn of the meniscus, which is easy to be misdiagnosed as a barrel handle tear, which is more likely to occur when the knee joint is externally rotated. Combined with sagittal images, a barrel handle tear can be ruled out (Figure 3). 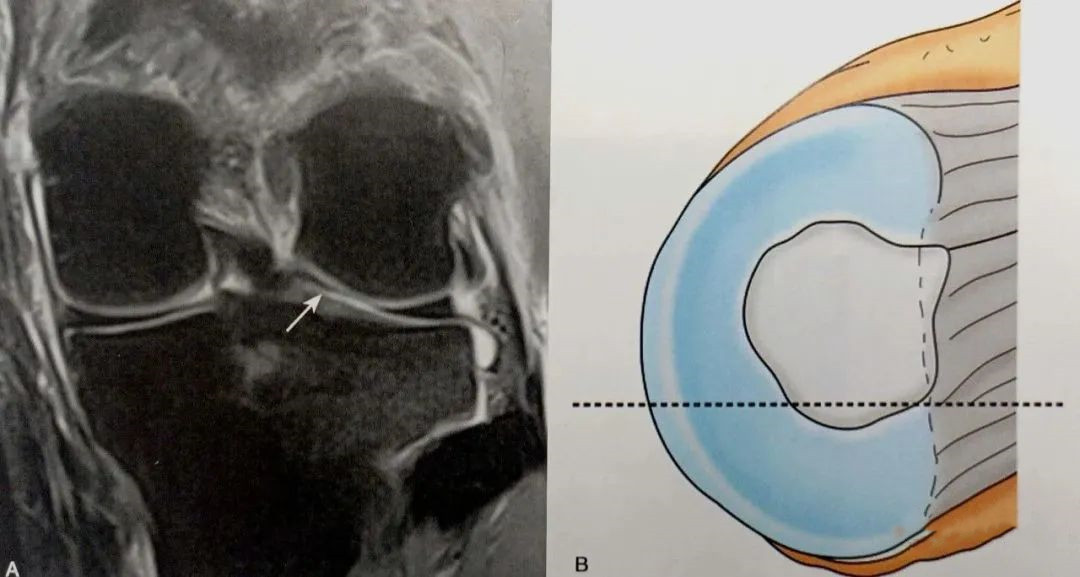 A. Coronal MRI, the arrow points to the posterior horn of the lateral meniscus, which is easy to be misdiagnosed as barrel handle crack; B. When performing MRI scanning according to the position shown by the dotted line in the figure, a pseudo barrel handle tear will appear.

Is a mixed vertical damage consisting of a longitudinal component and a radial component cyclically extending at the free edge.

Finally, there are complex meniscal injuries, without any clear description, involving multiple horizontal and vertical fissures.

Grade 3: Hyperintensity extends to one articular surface of the meniscus. 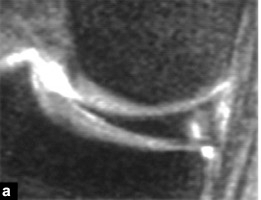 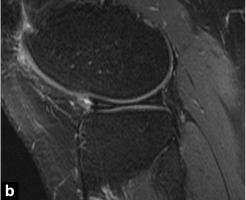 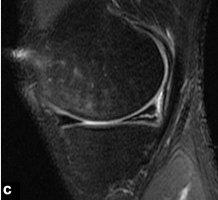 Although the distinction between grades 2 and 3 is modest, it distinguishes degenerative intrameniscal hyperintensity (Figure 5) from true fissures. This distinction between a degenerated and torn meniscus is not always straightforward, and there are many sources of error due to the appearance of extra or missing.

Figure 5. The degenerative appearance of the meniscus. Sagittal proton density view with fat saturation. High signal areas can be seen without any true fracture linear image.

MRI has excellent performance, with sensitivity and specificity between 90% and 95%. On MRI, a meniscal cleft appears as an intermediate linear hypointense extension to one of the articular surfaces of the meniscus (Stoller grade 3), or a pure morphological abnormality.

When the tear is only visible on a single slice, there are some difficulties, especially the high risk of false positive results. If hyperintensity within the linear meniscus significantly affects the meniscal surface, i.e. in at least two adjacent sections, it is recommended to be considered pathological. This concept should be adapted depending on the image acquisition technique used (3 to 4 mm sections or obtaining a 3D volume with isotropic mm sections).

Radial meniscal clefts are sometimes more difficult to diagnose, given their orientation. These mainly lead to morphological abnormalities: 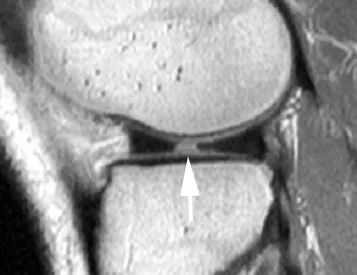 Rupture of the meniscus with a bucket handle complicates approximately 10% of longitudinally extending spondylolisthesis. In this case, the sensitivity of MRI is about 70%, depending on the diagnostic criteria used. 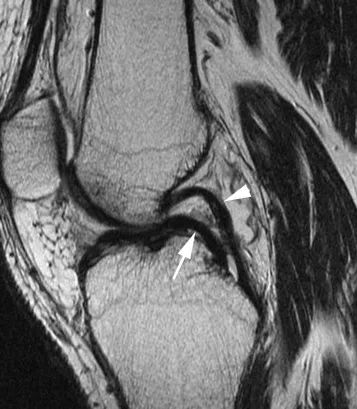 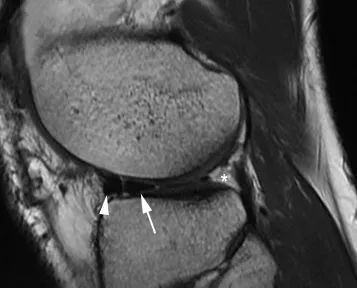 Figure 8 Appearance of the front giant horn. Sagittal proton density weighted view. The anterior part of the dislocated fragment (arrow) is attached to the anterior meniscus angle (arrow). Note that the rear corners are not shown (*).

Other MRI signs have been validated, such as missing bow tie, inverted meniscus sign, or meniscal fragments displaced directly into the intercondylar region on millimeter frontal images (Fig. 9) or axial images. 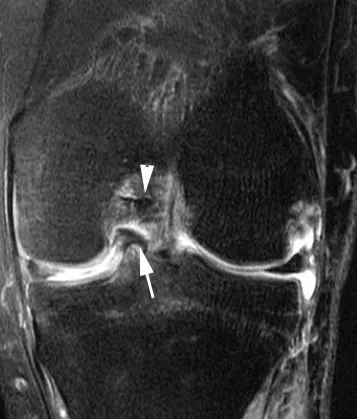 Another formal sign of meniscal instability is the identification of peripheral displacement of meniscal fragments into the femoral meniscal recess or the femoral-tibial recess. These displacements involve almost exclusively the medical meniscus and are a complication of some horizontal cleft cases in 10% of cases. Coronal and transverse sections are the best way to identify these fragments.

They result in a 5 mm offset to the superior meniscus from the posterior border of the tibial plate on sagittal images (Fig. 11), or fluid insertion between the base of the meniscus and the plane of the joint capsule. 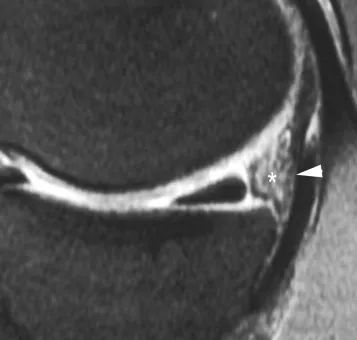 This is the result of a violent injury and is due to meniscal-tibial ligament rupture and detachment of the medial portion of the meniscus. On MRI, the separated meniscus is completely surrounded by fluid and appears to "float" on the tibial plateau (Figure 12). 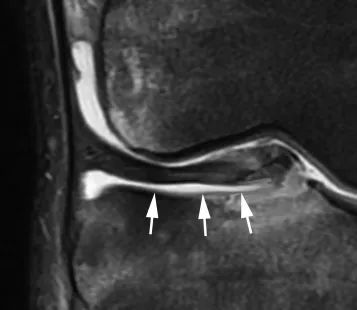 Recurrent pain after meniscectomy presents many diagnostic difficulties: recurrent fissures, postmeniscectomy, chondrolysis, subchondral necrosis, or arthralgia. MRI often fails to detect recurrent fissures because meniscectomy leaves intermediate hyperintensities that "wrongly" communicate with the meniscus surface. The only finding that was considered pathological and interpreted as a recurrent fissure was fluid intrameniscal hyperintensity on T2-weighted images. These limitations of simple MRI alone have prompted some authors to propose the use of MRI arthroscopy, although again the results here are inconsistent.

How to buy meniscal repair instruments？

At CZMEDITECH, we sell meniscal repair instruments. The price of Orthopedic instruments usually varies depending on the price of the raw material. For the latest price, please contact us and we will provide a quotation suitable for your country/region. We export worldwide, so you can contact us at email address song@orthopedic-china.com for a free quote, or send a message on WhatsApp for a quick response +86-18112515727.