Get a Quote
You are here: Home » News » How to remove the intramedullary nail?

How to remove the intramedullary nail?

Universal intramedullary nail removal and broken nail removal sets are available on the market, and these sets can help solve the above problems. However, blind surgery is not recommended without specialized tools.

Using a long nucleus or laparoscopic forceps, the distal portion can sometimes be grasped and successfully removed. However, long forceps do not provide a strong grip, and successful removal depends on whether the distal part has loosened. 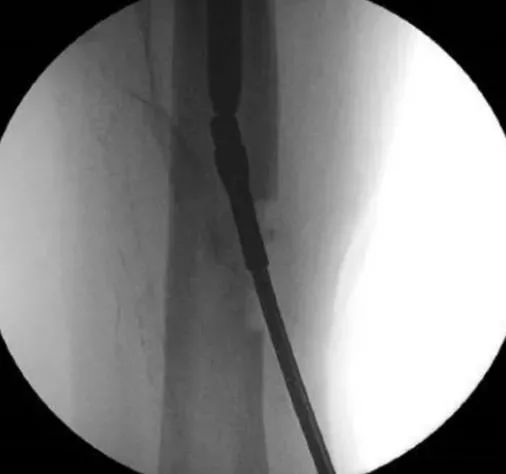 The head or proximal portion of an interlocking screw can usually be removed using the matching screwdriver. Sometimes the threads of an interlocking screw can slip within the bone, requiring traction around the head of the screw with forceps and a screwdriver to unscrew it. Damaged screw heads may require special tools for removal, such as internal fixation removal kits such as counter-threaded drills. The distal part of the broken screw is sometimes completely loosened, which does not affect the removal of the main screw, and can be left in the body if it does not affect the subsequent treatment operation. However, sometimes a broken distal nail can cause an iatrogenic fracture when the main nail is removed, and it is necessary to remove it. The most commonly used method is the push-out technique of the screw, that is, the main screw is withdrawn to its original position, so that the screw hole on the bone surface is in the same line as the locking hole of the intramedullary nail, and the broken screw is removed by using a Steiner's wire, a small malleus rod or a screwdriver. The pin is pushed out through the pin hole in the contralateral cortex and removed through a separate incision.

At CZMEDITECH, we sell Orthopedic instruments. The price of Orthopedic instruments usually varies depending on the price of the raw material. For the latest price, please contact us and we will provide a quotation suitable for your country/region. We export worldwide, so you can contact us at email address song@orthopedic-china.com for a free quote, or send a message on WhatsApp for a quick response +86-18112515727.